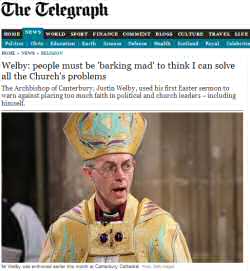 Justin Welby hit the headlines by choosing, for his first Easter sermon as Archbishop of Canterbury, his failure as a leader.1  To some, this might seem a slightly odd topic, or perhaps a side-issue to the real message of Easter.  But, from a Jungian perspective, it can be seen as a brilliant choice, both from a leadership point of view and one of personal, spiritual development.

Jung was “absorbed by the question of leadership” (Samuels 1993, p. 287).    Much of Western leadership culture is concerned with aiming to be the perfect leader – doing things better, to a higher standard, or becoming more excellent.  In analytical psychology, however, this is one-sided and unrealistic, and a better leader is one who aspires to wholeness.

The Jungian analyst Andrew Samuels has identified what this means in practice, by adapting Winnicott’s concept of ‘good enough parenting’ (Samuels 2001, p. 77).  A baby initially expects its mother to be omnipotent but, in order to develop and become self-sufficient, the growing child needs to learn about the mother’s limitations in a constructive way.  The mother still plays a vital role, but not an omnipotent one.

Samuels applied this to leadership by pointing to the vital role of failure.  Any leader striving for perfection, or to meet expectations that are too high, will fail – with the potential to go from being idolised to being demonised in a short space of time.  ‘Good enough leadership’ is one that plans for failure, but in a constructive way.  It brings expectations down to a realistic level and frames the failure (in advance) in a way that meets the needs of the group being led.

Justin Welby’s sermon skilfully tackles this problem of heroic leadership culture head on.  He uses humour to expose unrealistic expectations for what they are, labelling them as signs of someone being “barking mad” (Welby 2013).  He then briefly and tacitly calls for people to consider their own actions instead, by showing tolerance of both leadership failure and their differences with others.  His sermon may not be a ‘perfect’ example of good enough leadership, but it is good enough.

What leaders and followers can do differently

One practical lesson from Samuels’ approach is that leaders need to recognise that failure is an integral part of leadership.  Rather than aim to be the perfect leader, they should plan for failure – so that when it happens it is for the good of those being led.  By integrating failure into their leadership portfolio, they become more whole and, ultimately, better and longer-lasting leaders.

Good-enough leadership also implies that followers need to have more realistic expectations.  There needs to be a shift of emphasis, as implied at the end of Welby’s sermon, from expecting leaders to solve big problems, to individuals solving their own small problems.  Jung’s view (along with many others) was that taking responsibility for our own personal development helps many of the world’s bigger problems to ebb away.