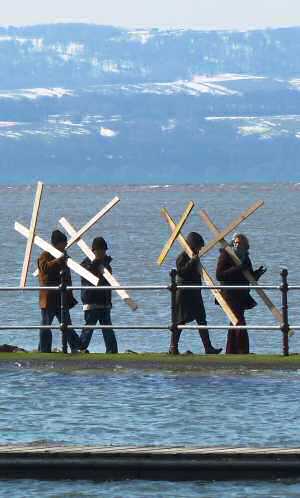 Why do dozens of people stand in near-freezing temperature for an hour, holding two planks of wood, saying very little, and for no reward?  In what has become an annual event at West Kirby, at 10:30am on Good Friday, local churches surrounded the Marine Lake – with the sole aim of holding up a cross for anyone in the vicinity to see.

The symbol of the cross unites more than two billion Christians across the globe.1  But – you might ask – what makes it different to other images that are also recognisable across the world – such as the McDonalds, Apple or BMW logos?

A symbol, however, points to something unknown and mysterious, and is often the precursor to a transformation.  Symbols are relevant not only to religion and spirituality, but also to leadership and politics.  For example, Nelson Mandela became a symbol of hope for many in South Africa (e.g. see Mandela 1990).  Although the South Africans didn’t know what the future held, Mandela’s release was an important, emotional and iconic moment in the process of South Africa’s transformation from apartheid to full democracy.

No image can be categorised as a sign or symbol, because it depends on the individual or group who view it.  For example, an atheist will often view the cross as a sign that, when it appears on a wall, represents a particular type of building, i.e. a church.

For Christians, the cross is symbolic – pointing to the unfathomable mystery that is God.  However, Jung introduced a further distinction – between living or dead symbols.  If the individual has lost touch with the ‘mystery’ of the Christian faith then – despite having Christian beliefs – the symbol has died and no longer has any transformative power (Jung 1921, op. cit.).

One of Jung’s primary concerns was that 20th century mankind was losing the ability and motivation to recognise symbols and to experience the transformation that they can bring.

If we always interpret an image as being confirmation of what we already believe, then we kill the transformative power of the symbol.  We therefore fail to develop as individuals and societies.

But if, in the expectation of transformation, we ask more questions about it – what does it mean?  what do I not know? what further mystery is there?  – then the symbol may lead to a significant and valuable transformation in our attitudes, spiritual awareness, and relationships.